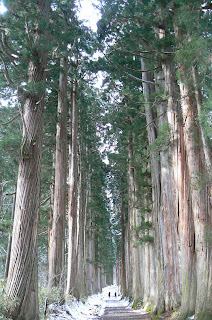 Throughout the ages, and all over the world, people have been awed by their local trees. Belief in tree spirits and in the sacredness of trees is widespread. To the ancient Greeks and Romans, trees were thought to be inhabited by female spirits called Dryad (oak trees) or Meliae (ash trees). In Scottish folklore a friendly tree spirit, called the Ghillie Dhu, helps lost children find their way home.
Japan, as might be expected, is home to a rich tradition encompassing various tree spirits, generally called Kodama. Traditionally, foresters made offerings to the Kodama before cutting a tree down. Also, various tree spirits can be counted among Japan's classical yokai fairies. One of my favorites is the jinmenju or "people face tree" depicted by Sekien Toriyama in his marvelous Gazu Hyakki Yako (1776).
In Okinawa Prefecture, the Kijimuna spirit inhabits huge gajumaru fig trees, and is said to bring prosperity to the home. Japan's most famous kodama are the cute little white shaky-head guys portrayed in the famous anime movie Princess Mononoke, and the large and small camphor tree (kusu) spirits in My Neighbor Totoro.