a season in purgatory (1) 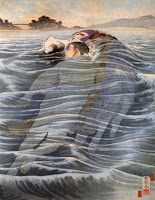 “It’s almost impossible to tell you how this sunny spring makes me feel. It’s like talking about a dream. This quiet sadness. Can’t you feel it? It’s like seeing the most vivid part of a dream, don’t you think? . . .

“I feel more vulnerable in the spring than in the fall. That’s why I’m so damp. This isn’t sweat. It’s something the sun has wrung from my heart. Not pain, not distress. More like blood being squeezed from the tips of a tree’s tender leaves, as though my bones are being extracted and my skin is being melted. Yes, that’s the perfect expression for times like this. I feel like I’ve turned into water, as though what’s being melted of me will soon disappear, and that there will be tears—though neither of sadness nor of joy.

“Invited by a warm, gentle wind, the soul becomes a dandelion blossom that suddenly turns into cotton and blows away. It’s the feeling of fading into death after seeing paradise with your own eyes. Knowing its pleasure, you also understand that heaven is vulnerable, unreliable, sad.


In time of departures, thinking of beginnings. Of what once brought me here, of what awoke the passion—and, later, the disappointment.

Of why the fascination never ends.

My view of Japan was always from the ground, between the country and the city, working, living among Japanese people. I was never one to seek company among groups of expats, be they struggling academic researchers or well-off Roppongi types.

Yet, at the same time, mine was always a Japan of the mind, because fundamentally mediated by literature. It was in certain Japanese writers, in their words and images, that I have found something which resonates deeply within me and with which I have played hide-and-seek ever since. Something I cannot fully explain but that is at once universal and unique, as is the hallmark of all great art.

While I did feel the initial attraction for the quaint and pretty vanishing Japan of the Western exotes—Lafcadio Hearn, Pierre Loti, Wenceslau de Moraes—it soon struck me as stereotypical, remote, outdated.

What I was looking for and have found, heartbreakingly, here is a dark and unsettling truth that, once one touches it, one cannot but recoil—in horror, in disgust, and, above all, in sadness. One cannot avoid seeing and thinking of it, though, at times judgmentally, at times sympathetically, but never with indifference.

Were I to name the writer who has struck the deepest chord with me in this respect, it would be Izumi Kyoka. His tales of madness and death sound so quintessentially Japanese, and yet so archetypal and thus universal in the human struggles, oppressions, inequities, and impossibilities they embody.

As a feminist—that is, as someone who is committed to social change in order to achieve more balanced,  fairer and thus happier relationships between women and men—what puzzles me in Kyoka is, on the one hand, his sympathetic depictions of witty and lovely female heroines, who, precisely because of their wit and loveliness, are crushed by a brutal, callous patriarchal society that values them only for their outer beauty and fertility. They are never more than coadjutants, helpers, or mere toys. Countess Kifune in ‘The Surgery Room’ (1895), Tamawaki Mio in 'One Day in Spring’ (1906), among others: their desire for love, their lives stifled and destroyed by a society that oppresses the true emotions of people. These women are invariably bright and beautiful, weak and strong, passionate and pure-hearted, but also mad and downtrodden.

And herein lies the 'on the other hand’, the all-pervasive double standard that has haunted the male images of femininity, time out of mind: Woman as maternal, nurturing, but also as dangerously alluring; Woman as the saviour of Man but as someone who must be subjected to unspeakable suffering and sacrifice to qualify for the honour of bringing the male his inner peace. There is no doubt as to who remains at the centre, shaken and embattled at times, but fundamentally immovable in the end. Woman is to be fought as a demon or altogether avoided; or, even worse: Woman is to be placed on a pedestal and lovingly revered as a being from a distant star, divinely powerful. She has no agency in this world though, no subjectivity, no reality. In a word, she is better dead—or asleep or subdued—than alive. (Some call this misogyny, but who am I to stick on labels?)

All these sexist stereotypes trammelling women have existed in the West, under different guises, since time immemorial. Yet in Japan they assume particularly disturbing sexual overtones, because Japanese masculinity is so grounded in the psychology of amae—mother-dependent sons who never really grow up—and Japanese femininity trapped in the interplay of female spoiling and male dependence. The dominance of the mother in this culture is what has, ironically, perpetuated what Chizuko Ueno coined the Japanese 'transvestite patriarchy': a patriarchy that cloaks itself in femininity, making thus women's situation more complicated and the struggle against male dominance more difficult.

Charles Shiro Inouye, in the magisterial Introduction to his selected translations, argues that Kyoka’s sexually hesitant heroes mark ‘the birth of the weak male’, the beginning of a process of male regression that is so blatantly obvious to anyone familiar with contemporary Japanese society. In Kyoka, the sexually immature, neurotic male is tempted and crazed by a desire which he rarely has the courage to test and which remains therefore unfulfilled, as in ‘The Holy Man of Mt. Koya’ (1900). To quote Inouye again: 'They make beauty, not love'… A truncated eroticism.


Although their graves are in different places—one in the hills of Aoyama, one downtown in Yanaka—the countess and Doctor Takamine died together, one after the other, on the same day.
Religious thinkers of the world, I pose this question to you. Should these two lovers be found guilty and denied entrance into heaven? (p. 20)

Or as in the drowned corpses at the end of ‘One Day in Spring’:

The boy’s head was like a jewel pressed against the woman’s breast, the red lion’s cape still wet and tangled around her white arm. Beautiful and alluring, Tamawaki Mio had finally discovered the destination of the dead.
The wanderer would never forget how they had parted at the embankment, how he had looked back and seen her, holding her purple parasol to the side, her black hair weighing down upon her as she watched him walk away. As the sand on the beach spread and drew back soundlessly, hollowing out and filling back in, he thought of how the waves must have ravished her. From the sand there appeared only beautiful bones and the color of shells—red of the sun, white of the beach, green of the waves. (pp. 139-40)


And it is here that Kyoka’s unsettling ambivalence lies, as well as my own ambivalence towards him and the world he stands for. A world where oppression and death are viewed as beautiful and virtuous, and which has bred both images of striking beauty and the most dangerous, wrongheaded delusions and mistakes.

Not a heaven, most definitely, but a purgatory of unfulfilled love and lost souls, epitomised in Kyoka’s strangely oppressing, dark Spring.

I've recently bought a copy of Japanese Gothic Tales, reading your post on it makes me want to read it all the sooner.